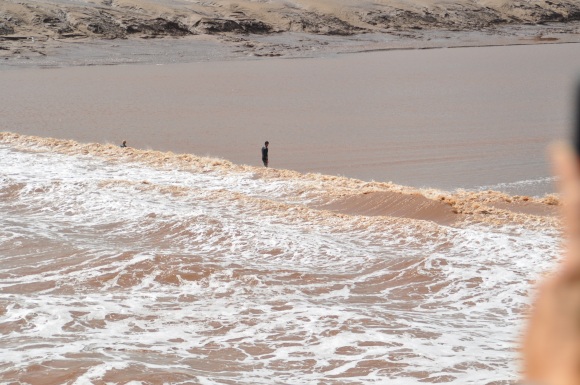 To despise, revile and ridicule the year that was is a taunting temptation. So too, is the impulse to celebrate, rejoice and exult. Rarely, do we find, in repose, the clarity to declare that the past 12 months of our brief lives were. . .well, just fine, thank you very much.

In fact, in New Brunswick, there was much to mark merrily in 2014, starting with the orderly transfer of democratic power (a miracle, by every standard, on this vicious orb).

The young and energetic Liberal Leader, Brian Gallant, replaced the slightly older, but equally energetic, David Alward as premier of the province. The latter receded gracefully into the background of politics, after one term in office, as the former rode the crest of a wave of support appropriately reserved for honeymooners.

Premier Gallant promised in his campaign to restore the legal apparatus for a woman’s right to choose her own reproductive options. Within a month of assuming office, he did just that. According to a CBC report in late November, “The premier promised in the election campaign to review Regulation 84-20, which requires women seeking a hospital abortion to have two doctors certify it as medically necessary. The review identified barriers to abortion services, according to Gallant.

“It also requires the procedure to be done only by a specialist, whereas other provinces allow family doctors to perform abortions. The so-called two-doctor rule has been in place for two decades, supported by previous Liberal and Progressive Conservative governments.

“Identifying those barriers was an important step towards eliminating them,” Mr. Gallant stated, adding that the new rules will no longer insist that two doctors guarantee that the surgery is medically warranted. As the CBC reported, “This will put reproductive health procedures in the same category as any insured medical procedure, according to the government.”

Indeed, the premier noted, “We have identified the barriers and are proceeding to eliminate them in order to respect our legal obligations under the Supreme Court of Canada ruling and the Canada Health Act regarding a woman’s right to choose.”

Lamentably, that’s where the innovation ended.

As for natural resources, the new premier has been equally faithful to his campaign promises (much to the surprise of every scribbling pundit in the province, including Yours Truly). He will not, he says, sanction any form of fracking as long as he remains unconvinced about the technology’s safety and environmental soundness. And, for now, he remains unconvinced.

This decision could cost New Brunswick tens-of-millions of dollars a year from a mature industry that has never polluted the air, spoiled the soil or poisoned the water table. It might even inspire a wholesale exodus of oil and gas industries from this province at a time when the budgetary deficit clings perilously close to $400 million and the long-term debt hovers around $12 billion.

Still, Mr. Gallant is adamant. And, for that, at least, he should be respected. As an elected representative, he is sticking to his guns. How he intends to pay for his multimillion-dollar infrastructure build over the next four years remains an open question – and, for now, a question for another time.

In the end, as New Brunswick’s social contract appears progressive, its economic future looks very much like its present and recent past: unspectacular, uninspired and fundamentally unproductive.

For all the good this province’s new government purports to arrange for its citizens, all who might pay for such noble intentions find cold comfort at the curb to which they’ve been kicked.

For all the bad this province’s new government hopes to avoid, all who might benefit from such principled injunctions obtain higher costs at local fuel depots fed by foreign oil and gas.

As for the rest of us, the merely okay with the status quo, we’ll just keep calm and carry on, hope for the best and imagine that at this point in our brief lives we are, indeed, just fine.