In the lemur cage 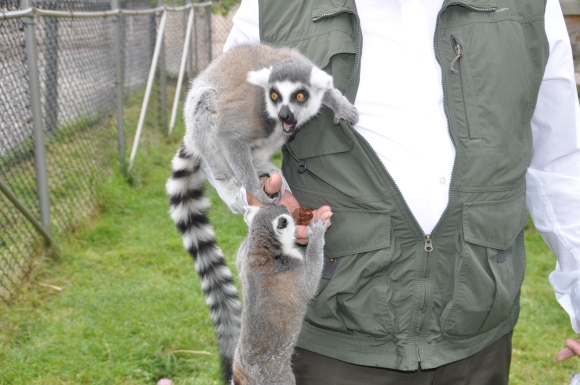 Almost nothing incinerates in me that odd, albeit infrequent, mood of reticence more thoroughly than a ring-tailed lemur perching gamely on my shoulder.

To be sure, this was not how I expected my day to unfold when I grabbed my camera and headed out to the Magnetic Hill Zoo in the outer burbs of Moncton. My job was routine enough: Snap a few pics of the establishment’s manager, Bruce Dougan, for a magazine piece I had been writing.

Mr. Dougan, a burly man with an Arctic fringe of beard and a safari leader’s comportment, is a born showman. He has to be. Without an effective promoter at the helm, a zoo can become as endangered as many of the wild animals they house.

So, it really shouldn’t have surprised me when he led me into the lemur cage to pose with a handful of friendly, inquisitive primates. Suddenly, the joint was bustling with dozens of the human variety, their noses pressed against the chain-link fence, delighted to watch the photog struggle to regain control of his camera from the creature attached to his forearms.

I am a little embarrassed to admit that in the 20 years I’ve lived in Moncton I’ve only been to the zoo three times – two of those occasions within the past month (once with one set of grandkids; the other on the aforementioned photo assignment). Frankly, I really haven’t known what I’ve been missing.

On one of my trips, the line of young families and old folks waiting patiently for admittance stretched all the way to the far end of the parking lot. A recent CBC story provided the context when it reported in June that “The Magnetic Hill Zoo in Moncton is opening a $1.4-million exhibit that will showcase three big cats. Visitors will be treated to a new exhibit featuring two Amur Tigers – Alik and Anya – and a leopard, named Katushka.

“Jeremy Nelson, a board member of Friends of the Zoo and chair of the fundraising campaign, said the new exhibit is the biggest project the zoo has ever undertaken. ‘I can’t believe we’re finally here today. There’s not a person who won’t be wowed when they walk in,’ he said.”

Added Mr. Dougan, in a statement: “It’s amazing that we have two of the most endangered cats in the world right here in Moncton.”

I’m not sure “amazing” is the right word. After all, the city’s public website describes the facility thusly: “The Magnetic Hill Zoo. . .is committed to safeguarding animal species and raising public awareness of endangered species. The zoo is designed with the well being of the animals. . . in mind.”

What’s more, “The staff of the. . .zoo is very concerned with protecting endangered animals. They follow national protection movements closely and participate in diverse repopulation programs. The . . .zoo is the provincial headquarters for the Frog Watch program, an initiative of the Canadian Minister of Environment to gather environmental information on Canada’s diverse frog species. . .In 2010 and 2011, the. . .zoo worked in partnership with Parks Canada to implement the Piping Plover Recovery Program. Eggs from abandoned nests from two maritime National Parks were brought to the . . .zoo for incubation and hatching.”

Protecting endangered species – or at least raising awareness of them – appears to be in the zoo’s organizational DNA.

Still, Mr. Dougan’s amazement is well taken. It stands to reason that a city – whose latin motto “resurgo” means, in English, “rise again” – should boast a zoo where reticence is impossible – especially in the lemur cage