The importance of being Annie 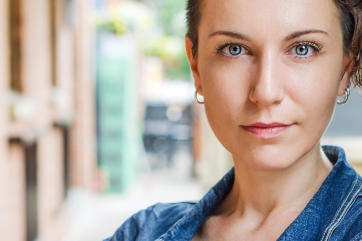 With Halifax dramaturge Annie Valentina, you don’t always get what you see.

Forthright and passionate about her craft, she’s also soft-spoken and circumspect. Neptune Theatre calls her its “Artistic Accomplice,” but she seems more of a persuader than partner in crime.

Still, she likes the title her boss, Artistic Director Jeremy Webb, gave her when he hired her last summer to help build a more inclusive and regionally relevant creative environment. “It could mean a lot of things,” she smiles over sips of black tea, “so it’s a good way of seeing.”

What matters now is how others in local theatre see her.

She’s certainly not an unknown quantity. Since emigrating from Norway in 2000, the playwright-producer has taken the indie scene by storm. Last fall in Halifax, she mounted “What to Expect When You Aren’t Expected”, a piece she composed and directed based on an academic examination of the experiences of LGBQ+ birthing women in Nova Scotia.

Says Dr. Lisa Goldberg, a Dalhousie professor of nursing who generated the original research with her colleague, Dr. Megan Aston: “It went better than I could have expected. She’s brilliant, and I adore working with her.”

All the same, Webb insists, “she won’t take crap from anyone.”

She’ll need that winning combination of protagonist and philosopher to help manage Neptune’s new Chrysalis Project, designed to support emerging artists. “There is a lot of wonderful truth-telling work coming out around here,” she says. “We need to show it.”

After all, with Annie Valentina, you tend to get what you need.