Let us all now praise Alice 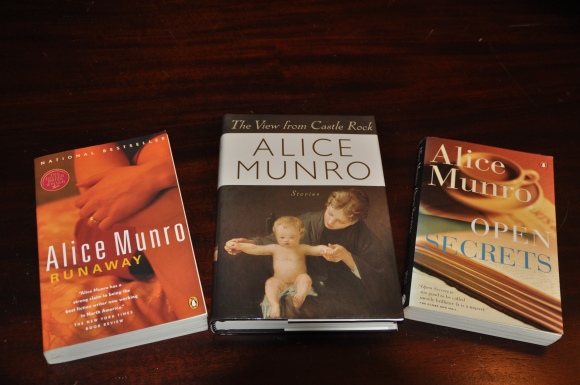 “Okay, everyone’s calling Me to get me to write about Alice,” she tweeted. “Alice, come out from behind the tool shed and pick up the phone.”

In fact, Ms. Atwood did write about her friend, who, until recently, rusticated in Clinton, Ontario, for The Guardian last Thursday. In her piece, she wrote, “Whenever the Nobel is conferred, a deluge of media descends – like the pack of cards cascading on to that other Alice, she of Wonderland – not only on the winner, illuminated in the sudden glare of international publicity like a burglar trapped in headlights, but on every other writer who has known the chosen one. A quote, a reminiscence, an evaluation! Account for it! Why her? they clamour.”

Indeed, Ms. Atwood observed, “Munro herself is unlikely to say much along these lines: Canadians are discouraged from bragging – see the Munro story, Who Do You Think You Are? – so will probably spend much of her time hiding in the figurative tool shed. We’re all slightly furtive, we writers; especially we Canadian writers.”

One could easily extend the metaphor to include all citizens of the Great White North. Politeness may be our international brand, but that merely camouflages our instinct to break for the back door when uninvited company arrives through the front.

And, man oh man, has the company ever come calling for Ms. Munro, who at 82 is the first Canadian to win the prestigious prize for writing and only the 13th woman to do so. Her name enters a list that includes Winston Churchill, Ernest Hemingway, Rudyard Kipling, Doris Lessing, Toni Morrison, and Jean-Paul Sartre, who actually refused to accept his 1964 honour on the grounds that “a writer should not allow himself to be turned into an institution.”

For better or worse, that does appear to be Ms. Munro’s fate. The arcana collectors have been working round the clock to answer the question: What do we really know about Alice?

For one thing, reports The Toronto Star, “she grew up in the countryside. Her father, Robert Eric Laidlaw, raised foxes and poultry, while her mother was a schoolteacher.”

For another thing, “Munro’s first marriage to James Munro, who ran a bookshop, produced three daughters. The marriage ended in divorce in 1972. She remarried, but her second husband, Gerald Fremlin, died in April.”

In fact, The Star itemizes eight other “should-knows” about the author before it reproduces the list word for word – just in case, presumably, you missed something the first time through.

No one, it seems, is prouder of Ms. Munro and her accomplishment than her long-time publisher Douglas Gibson who, in a letter to the Globe and Mail this week, argued that “all levels of government should immediately join forces in a race” purchase and transform two of the author’s former homes into literary museums.

“Arrangements to buy both properties – at a fair price, and an appropriate time – should begin today,” he declared. “Parks Canada should be involved, on behalf of the millions of future literary tourists who will surely flock to see ‘Alice Munro Country.’”

As the Globe reports, neither Queen’s Park nor Ottawa are especially enamored of the idea.

“I join all Canadians in congratulating Ms. Munro for winning the Nobel Prize in Literature,” Environment Minister Leona Aglukkaq told the newspaper. “Unfortunately, under the current national historic site designation rules, her homes may not be eligible for designation.”

Meanwhile, a spokesperson for Ontario Premier Kathleen Wynne observed, “We believe that local municipalities are in the best position to determine how to manage those properties.”

Still, all may not be lost in the effort to lionize Ms. Munro. Progressive Conservative MPP Lisa Thompson told the Globe, “[The Nobel] is just a wonderful icing on the proverbial cake for Alice. We need to just revisit what’s already being done and if there’s anything more that can be done, I think all three levels of government need to, in partnership with Alice, determine what the right recognition is.”

That is, if they can coax her from her perch behind the tool shed.