The ‘Martinizing’ of Brian Gallant 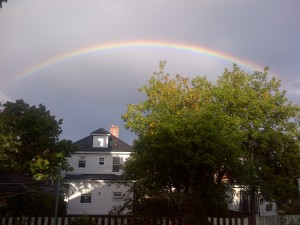 One of Brian Gallant’s greatest strengths is his youth, which also happens to be one of his greatest weaknesses.

That may explain why the 32-year-old Grit leader, who looks at times like he just graduated from junior high school, has rolled out one of his party’s grand, old men to sanctify an economic plan that would both cut and add about $300 million a year to the New Brunswick budget.

There he was at a Liberal pre-campaign announcement in Fredericton last week,

in all his ruddy-faced septuagenarian glory, Canada’s 34th Prime Minister the Right Honourable Paul Martin, who served for about 10 minutes (politically speaking) in the breaking years of the century.

Rising to the podium, he recalled his tenure as the nation’s finance minister in the early 1990s. “I had a very short-term target which I had to do because Canada was in very tough shape at that time and I was very worried that there was going to be an international financial crisis,” he said.

Referring to his youthful fellow traveller, Mr. Martin added, “He (Mr. Gallant) doesn’t have to do it all in two to three years, but what he does have to do is set very clear targets that are going to give everyone confidence that he will achieve them.”

Of course, confidence in political leadership – now at what must be an all-time low in just about every corner of the country – depends on the lucidity of the political purpose. And Mr. Gallant’s fiscal and economic agendas, while promising in many ways,  are still obscured by crowd-pleasing rhetoric, shy on details.

The Liberal leader says that should he become the next premier of New Brunswick, he will launch a thorough program review with the objective of finding at least $250 million a year in spending cuts. The haircut would occur in the second year of his term.

“We must get our fiscal house in order if we are strategically invest to create jobs and make life more affordable for New Brunswickers,” he said at the announcement.

Meanwhile, the aspiring chief elected officer has rolled out a plan to spend $300 million “targeted,” as one newspaper report explained last week, “at supporting job creation as part of a plan to begin paying down the province’s debt.”

As usual, the Tories made them do it.

“The Alward government has made its focus cut, cut, cut and cut, and that approach simply hasn’t worked,” Mr. Gallant said. “Their across-the-board cuts have recklessly depressed job creation, dropping government revenues and leaving us with a persistent $500-million deficit.”

In contrast, the Liberal plan would spend money to generate new jobs, which would, in turn, generate new tax revenue to fight the province’s pernicious $12-billion debt. Or, as Mr. Gallant stipulates, “We believe we must make strategic investments to create jobs and make life more affordable for New Brunswickers. We will lay out a plan that strikes a sensible balance between strategic investments and fiscal responsibility.”

To which a weary voter, wise in the ways political wiggle room, might respond: “What exactly is this plan of yours, Mr. Gallant? Any time now; we’re all ears.”

The problem with a phrase like “strategic investments” is that it doesn’t mean anything to most people. Like “productivity enhancements” and “continuous improvement” it whips past the brain pans of even the smartest voters.

I sort of get what Mr. Gallant is reaching for, but that’s only because I spent a few years as a political operative playing hardball with Darth Vader.

If he means that New Brunswick’s economy is the key to solving the province’s fiscal problems (no kidding, right Sherlock?) and that, as such, the economy must become more creative, diversified and technologically savvy to become more durable  and shock proof then he’s dead right.

He’s also right about the Tories’ one-horse-campaign. In reviving the economy, the province ought not to be the sum of its shale gas deposits. That’s not, well, strategically wise.

New Brunswickers have 30 days to make up their minds (if they haven’t already) about whom they’ll tolerate in elected office.

The youthful and grizzled, alike, want to know what, precisely, are the tactics involved in the job creation juggernauts of this and, indeed, all political parties in this province.

3 thoughts on “The ‘Martinizing’ of Brian Gallant”