Hoisted by their own petard 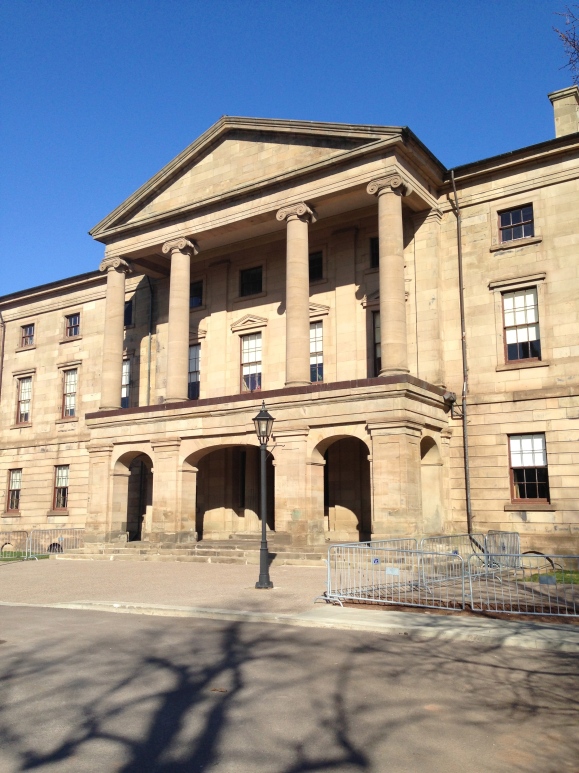 There was never anything essentially wise – beyond the obviously political considerations – about the Government of Canada’s white-knuckled determination to balance its budget come hell or Armageddon.

In their quietest moments even the fiscal hawks among us must admit that into all lives, some red ink must fall. Individuals, banks, commercial enterprises and, yes, even governments do, from time to time, deficit-finance their way to durable prosperity. That’s simply because the coincidence of opportunity and solvency is not always – in fact, never – perfect.

Knowing this, then, we ought not become the saps that campaigners on the hustings seem to think we are when they point to their debt-defying antics as proof of their unimpeachable sagacity.

Of course, the Harper government isn’t the first in this country to claim that it, and only it, has the best interests of the average tax payer at heart when it refuses to consider any alternative to a bottom line that reads: zero.

The problem is this ambition just doesn’t appear sensible, or even achievable, at the moment.

“Rotten Luck”, thy name is Torytown.

Oil prices are slumping more deeply than anyone expected. The economic revival in the United States is losing steam. The tragi-comedy that is the Grecian formula for European recession unfolds even as a downturn in our Greater Canuckistan’s resource-fired economy conjures the dreaded “R-word” here.

Now, the Parliamentary Budget Officer, Jean-Denis Frechette, says all of this is becoming a lethal cocktail for Conservatives.

According to a CBC report last week, “The government had projected a slim, $1.4-billion surplus for 2015 in its budget, which was presented last April.

Added the public broadcaster: “But that’s not the whole picture. Weak GDP growth, the budget office says, would be partially offset by higher inflation and lower interest rates. Once those are taken into account, the projected deficit is $1 billion this year, with a small surplus of $0.6 billion, or $600 million, in 2016-17, and $2.2 billion in 2017-18.”

In fact, writing in the Globe and Mail earlier this year, Jim Stanford, an economist with Unifor, had this to say:

“From the outset, the battle to slay the deficit was all about political optics, not economics. Canada’s deficits after the 2008-09 meltdown were among the smallest in the world. Our debt burden (the more important concern) is small compared to those of other countries and other periods in history. Indeed, as a share of GDP, the debt has been shrinking since 2012. So whether Ottawa has a small surplus or deficit any year is irrelevant.

“For this government, though, it’s a political imperative. Nothing will prevent the Conservatives from forecasting balance next year.”

Nothing, so far, has. Ignoring the writing on the wall has become a singular pastime in Ottawa. And no one plays the game more stubbornly than Finance Minister Joe Oliver who continued to insist – despite the rather compelling, new evidence to the contrary – that the government will better than balance the budget.

“We have looked at our numbers and we are very comfortable that we will have a surplus this year,” he said last week.

Such insistence, once merely economically unwise, is now becoming politically perilous to the self-described standard-bearers of wise money management.

Are certain petards about to hoist certain MPs, after all?

How hawks and doves circle

The move was as much symbolic as practical. How better to prove to Canadians that the federal, Tory regime is on the right, fiscally hawkish course than by selling its last, remaining stock in the giant auto company it bailed out when it was on a far more fiscally dovish flight path?

With that, Finance Minister Joe Oliver proclaimed the end of an era this week, authorizing his government’s divestiture of 73 million common shares in General Motors to Goldman, Sachs & Co. “We have eliminated a market exposure for Canadian taxpayers and returned GM to private-sector ownership, having supported its continued contribution to the Canadian economy,” he declared in a statement.

What a difference eight years makes to the leadership sensibilities of the governing classes. We may recall the bad, old days of global, financial collapse in 2008 and the Great Recession that followed, when the still tender-footed Harper majority was, like the normally counterpoised Obama administration, committed to economic stimulus not austerity, spending rather than restraint.

At that time, allowing the big automakers, GM and Chrysler, to fail was unthinkable on either side of the 49th parallel. Indeed, less than a year after Parliament Hill and Queen’s Park banded together to drop a combined $14 billion on the crippled manufacturers, then-federal Industry Minister Tony Clement declared, “This was not a decision we took lightly. But, at the end of the day, we knew that if we did not participate, what was at risk was not just the (direct) jobs but all the other parts manufacturers and other industries that go into having an auto sector in this country, and that has been estimated to be over 400,000 jobs that were at risk.”

He was probably, if frustratingly, correct. Now, it appears, the nation’s economy has recovered well enough to justify liquidating the government’s auto assets (reportedly worth about $3.5 billion) just in time to balance the budget later this month, roughly half-a-year before the next general election.

All of which may only prove that hawks and doves really can occupy the same airspace, depending on which way the political wind blows.

Still, the larger issue that concerns many economists in this country is whether a hell-bent rush to book a balance in the public accounts, come what may, is rational (or even possible) in the medium-to-longterm. The GM cash-out may not be, technically, a windfall, but something about it feels awfully like found money (“Don’t worry, Mabel, we’re saved from perdition; I just found Uncle Harry’s collection of gold nuggets buried in a coffee can down by the river).

Meanwhile, storm clouds are once again gathering in the broader economy – which is expected to grow only fractionally over the next quarter – a point that Bank of Canada Governor Stephen Poloz made clear in an interview with The Financial Times last week. “When the oil shock came, it was clear we would no longer be able to close the output gap by 2016, but by 2017,” he was reported to have said.

“Since we had some firepower, we took some insurance and cut rates. . .The first quarter of 2015 will look atrocious, because the oil shock is a big deal for us. . .

In theory lower oil prices mean (putting) more money in consumers’ pockets, but. . .if an oil company cancels (an investment) project, laying off a worker, that guy will not have the money to buy a new pickup truck.”

A balanced budget is a desirable objective for any lawmaker, but not when there are girders in the economy to support – and certainly not when all such book entries are manufactured for more symbolic than practical reasons.

Balancing the federal budget or bust

As the we wake up to the nauseating certainty that the Conservative government of Canada finds itself with its shorts down around its ankles, we might properly wonder what all that official, post-Great Recession palaver about economic stewardship and sound fiscal planning actually produced.

Plummeting oil prices – always considered a possible, if not likely, eventuality a year ago by those who actually pay attention to markets – have sent once-mighty prognosticators in high office scurrying like so many scared bunnies into a brier patch (as the oil patch, don’t you know, has become suddenly inhospitable for political animals of every stripe and species).

In fact, Finance Minister Joe Oliver is so shakent, he’s taking the unusual, if not altogether unprecedented, step of delaying the federal budget until “at least” April – all the better, presumably, to gauge the impact on federal coffers of lower dividends oil producers pay to the people of Canada in return for the economic license we have apparently granted to them.

Given that most experts now predict that volatility in the oil and gas sector will remain the new normal for some time (perhaps, as many as three years), it’s hard to cotton what Mr. Oliver’s finance department mavens are divining as they buy themselves a month to chew what’s left of their nails to the nubs.

Really? Why not make it two or even six, for all the good it will do.

The energy roller coaster now makes balancing the federal budget in any meaningful or sustainable way virtually impossible – so dependent on revenues from fossil-fuel production are government coffers; as are, in fact, increasingly broad swathes of the rest of the economy.

In 2013, according to Natural Resources Canada (NRC), the oil and gas sector generated $133 billion in gross domestic product (about 7.5 per cent of the national total) in his country. It employed 190,000 people, or about 1.1 per cent of the working, adult population, even as it accounted for $83 billion, or 21 per cent, of total capital expenditures in Canada.

Again, says an NRC bulletin, “Federal and provincial/territorial (P/T) governments in Canada receive direct revenues from energy industries related to corporate income taxes, indirect taxes (such as sales and payroll taxes), crown royalties (which are the share of the value of oil and gas extracted that is paid to the Crown as the resource

owner) crown land sales, (which are paid to the Crown in order to acquire the resource rights for specific properties.”

Moreover, “the largest share of government revenues is collected from the oil and gas industry, which averaged $23.3 billion over the last five years, including $20.7 billion from upstream oil and gas extraction and its support activities. Between 2008 and 2012, the energy industries’ share of total taxes paid (11.9 per cent) was in line with their share of total operating revenues (13.6 per cent).

So, when the price of oil takes a hit, so do we all in this country – at least, fiscally. That’s almost as immutable a law of nature as gravity or, more appropriately, the handwringing and teeth-gnashing of high-profile politicians determined to keep their promises – fool-hardy though they may be – come what may.

“The Conservative government is warning for the first time that falling oil prices could trigger new spending cuts in order to deliver on a promised balanced budget,” Bill Curry writes in the Globe and Mail this week. “On the heels of the surprise decision to delay the federal budget until at least April, the government is putting Canadians on notice that it is prepared to cut spending further rather than abandon its goal of balancing the books.”

It’s a challenge that Jason Kenney, federal employment minister, insisted in broadcast interviews last weekend could be met with “additional fiscal restraint.”  After all, he said, balancing the budget is a commitment we made to Canadians in the last election.”

It does, however, seem broadly nonsensical – and even amateurish, from a money manager’s perspective – to manufacture more austerity just to be able to show a book entry in black ink, fleeting though it may be.

Canadians want their government’s books in fine balance, yes – but not at the expense of programs that do more good for the economy than does a technical surplus the durability of which ultimately hinges on volatile forces beyond any one pledge-making politician’s ability to control.